What brings me here

The following (Seven) paintings are hand-picked from ~Fifty-plus generated images (in ten days) using Tolkien’s Poems almost word-for-word.
Tolkien is a master of detail and vast imagination. I’ve always been fond of his world and the vivid imagery he projects with his words.
His poetry is the perfect complement to his imagination. So I thought I might get tiny glimpses of his world using modern ML image-gen engines. And I was really blessed with the results.

The Song of Eärendil 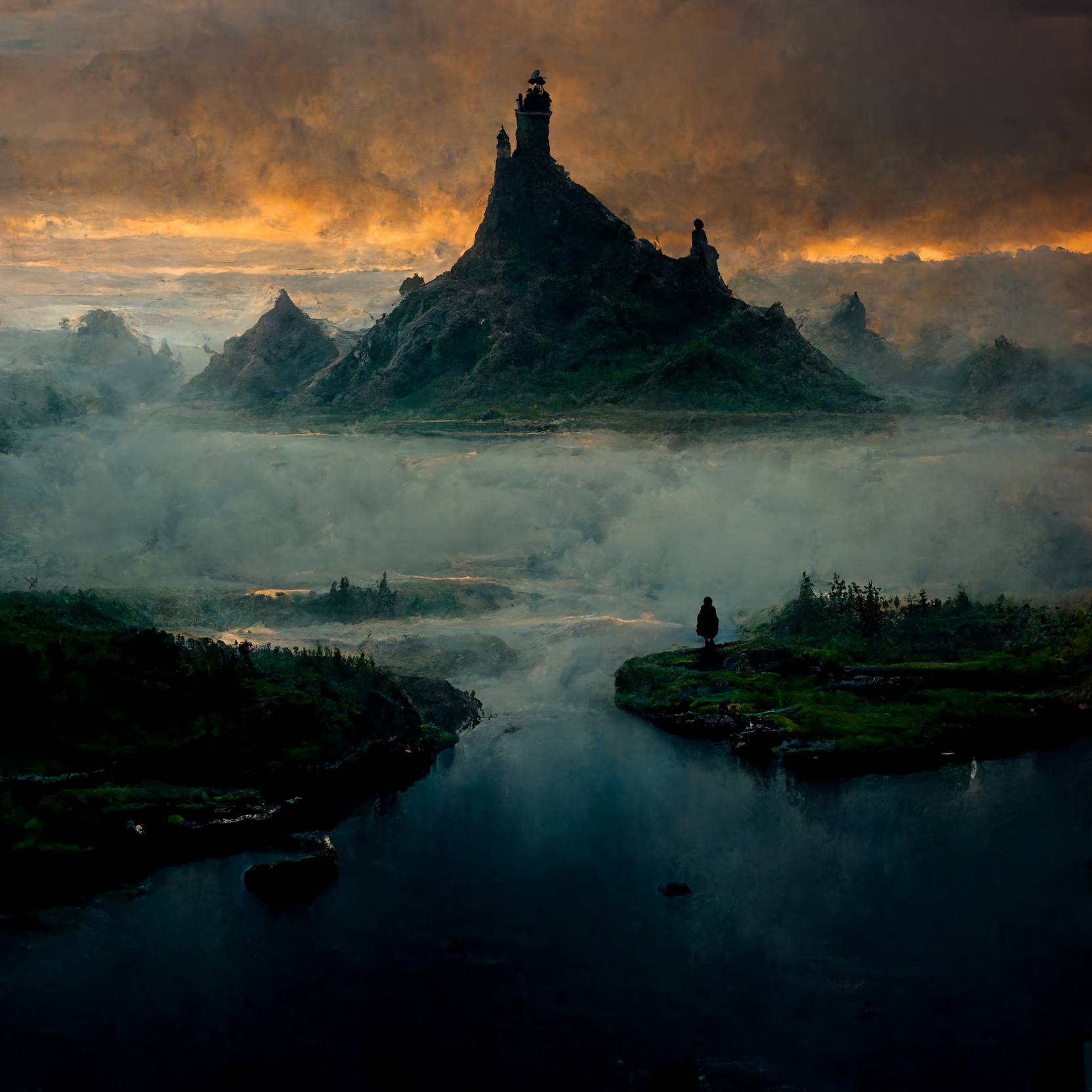 From World’s End there he turned away,
and yearned again to find afar
his home through shadows journeying,
and burning as an island star
on high above the mists he came,
a distant flame before the Sun,
a wonder ere the waking dawn
where grey the Norland waters run.

Here I had a happy accident, I used a short part from the poem stripping it off its context to generate an image. The result was very beautiful indeed. But “beautiful” was the opposite of what this tragic poem is about.

While through the storeyed elms
The gliding water leaves these inland realms,
And slips between long meadows to the Sea —
Still bearing downward over murmurous falls

However, when I used it in its original context the result was on the literal end of the spectrum. 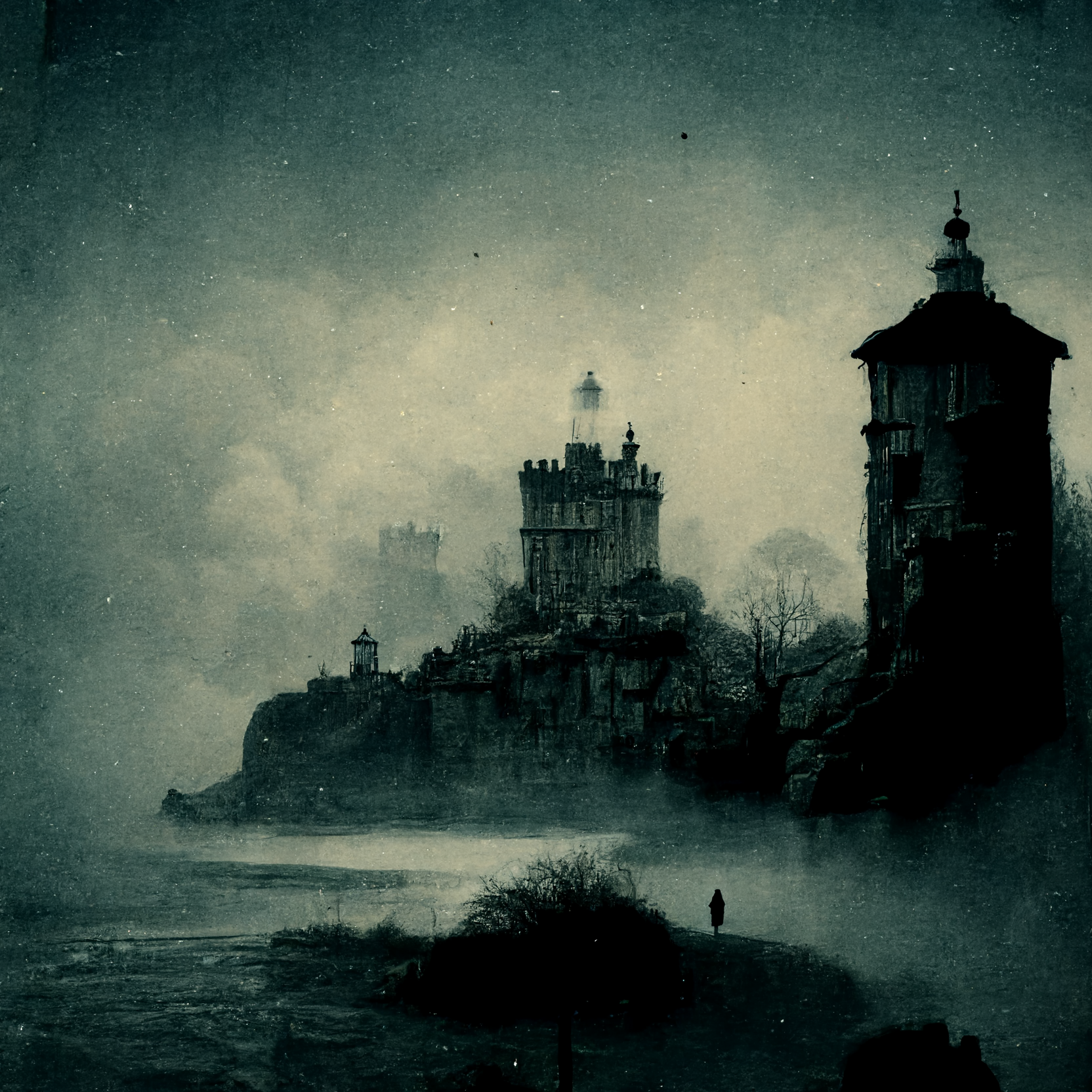 While through the storeyed elms
The gliding water leaves these inland realms,
And slips between long meadows to the Sea —
Still bearing downward over murmurous falls
One day and then another to the Sea;
And slowly thither many years have gone,
Since first the Elves here built Kortirion. 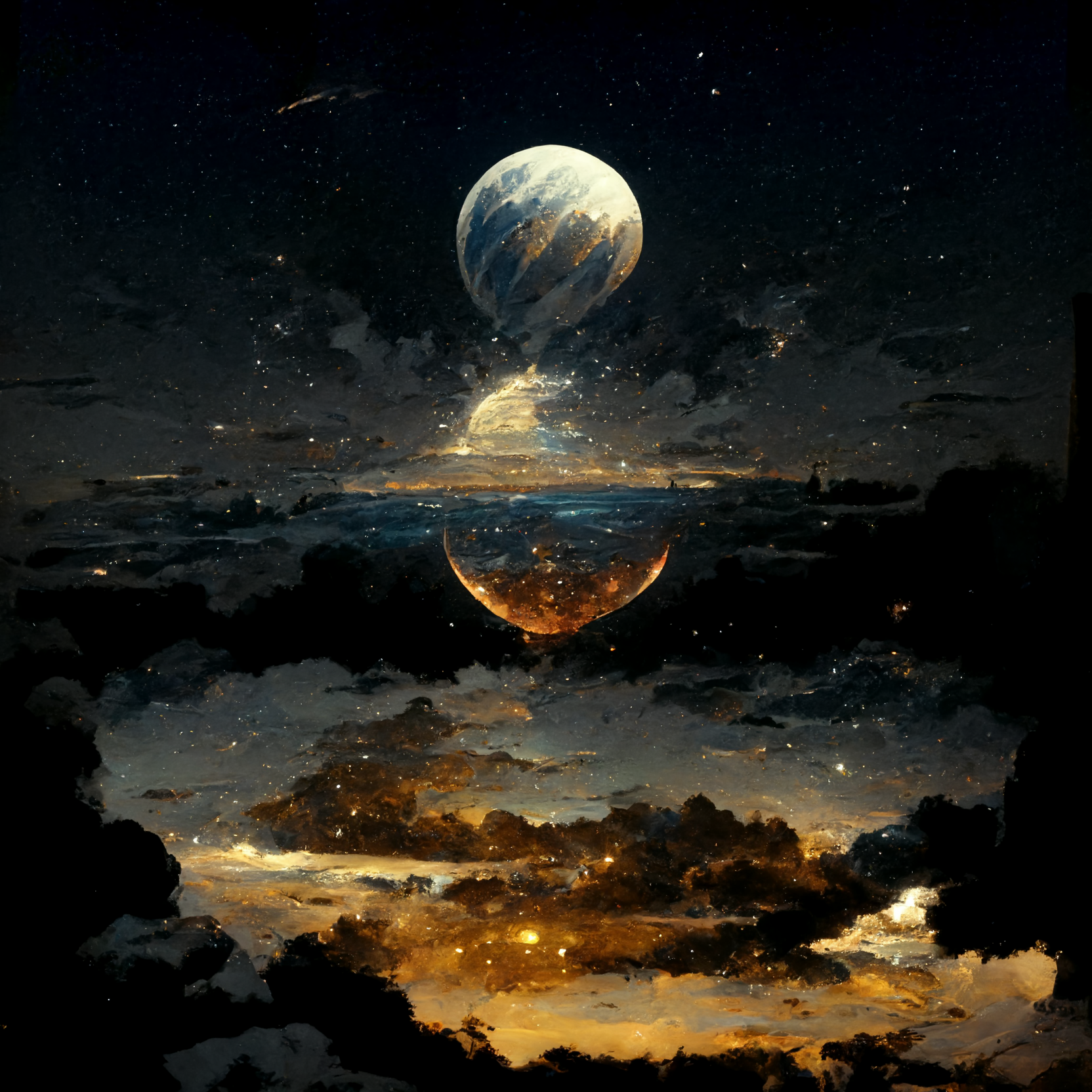 A globe of dark glass faceted with light
wherein the splendid winds have dusky flight;
untrodden spaces of an odorous plain
that watches for the moon that long has lain
and caught the meteors’ fiery rain —
such there is night. 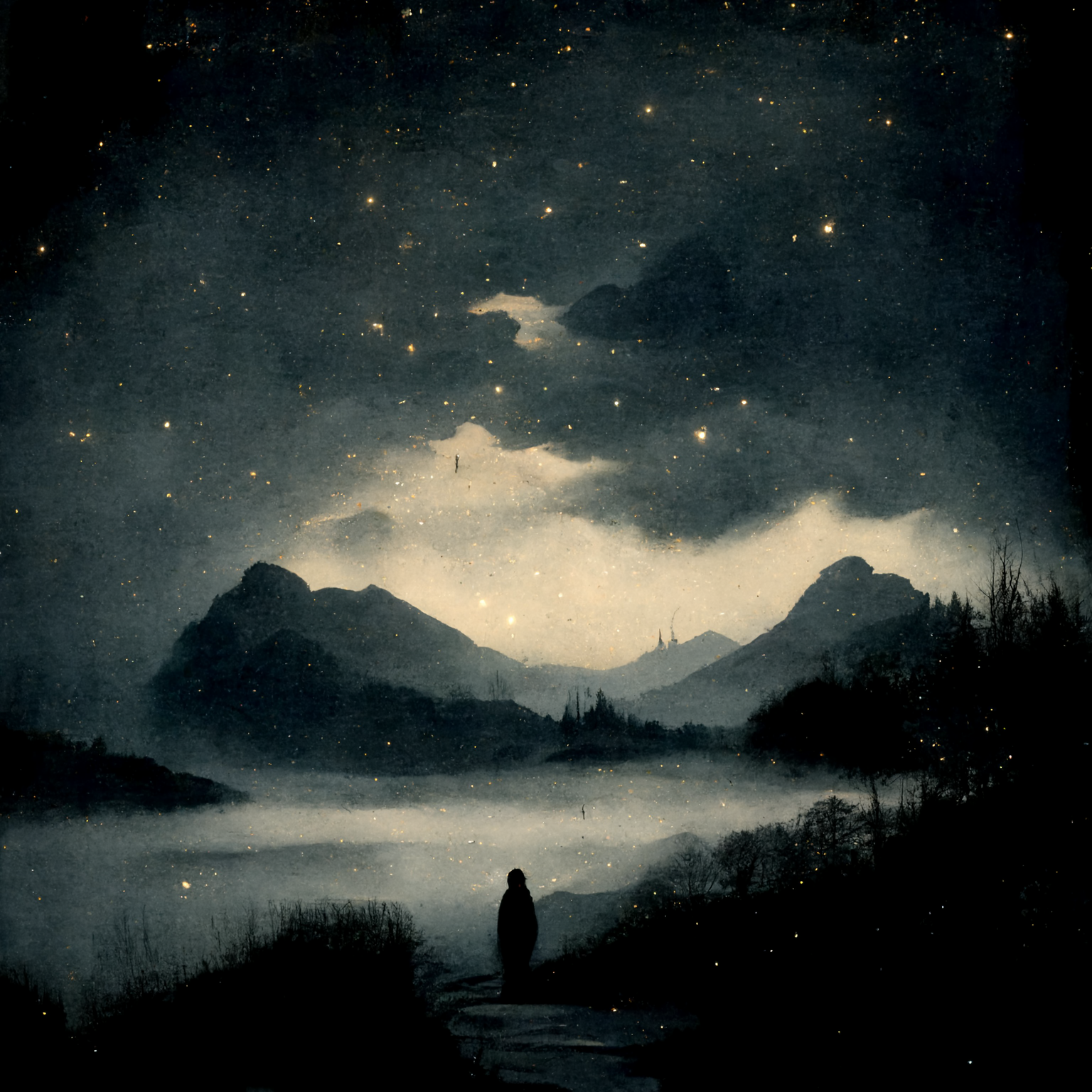 Not night as ours, unhappy folk,
where nigh the Earth in hazy bars,
a mist about the springing of the stars,
there trails a thin and wandering smoke
obscuring with its veil half-seen
the great abysmal still Serene.

The Song of Ælfwine

Uncounted leagues away it lies from here,
And foam there flowers upon the sea
By cliffs of crystal carven clear
On shining beaches blowing free. 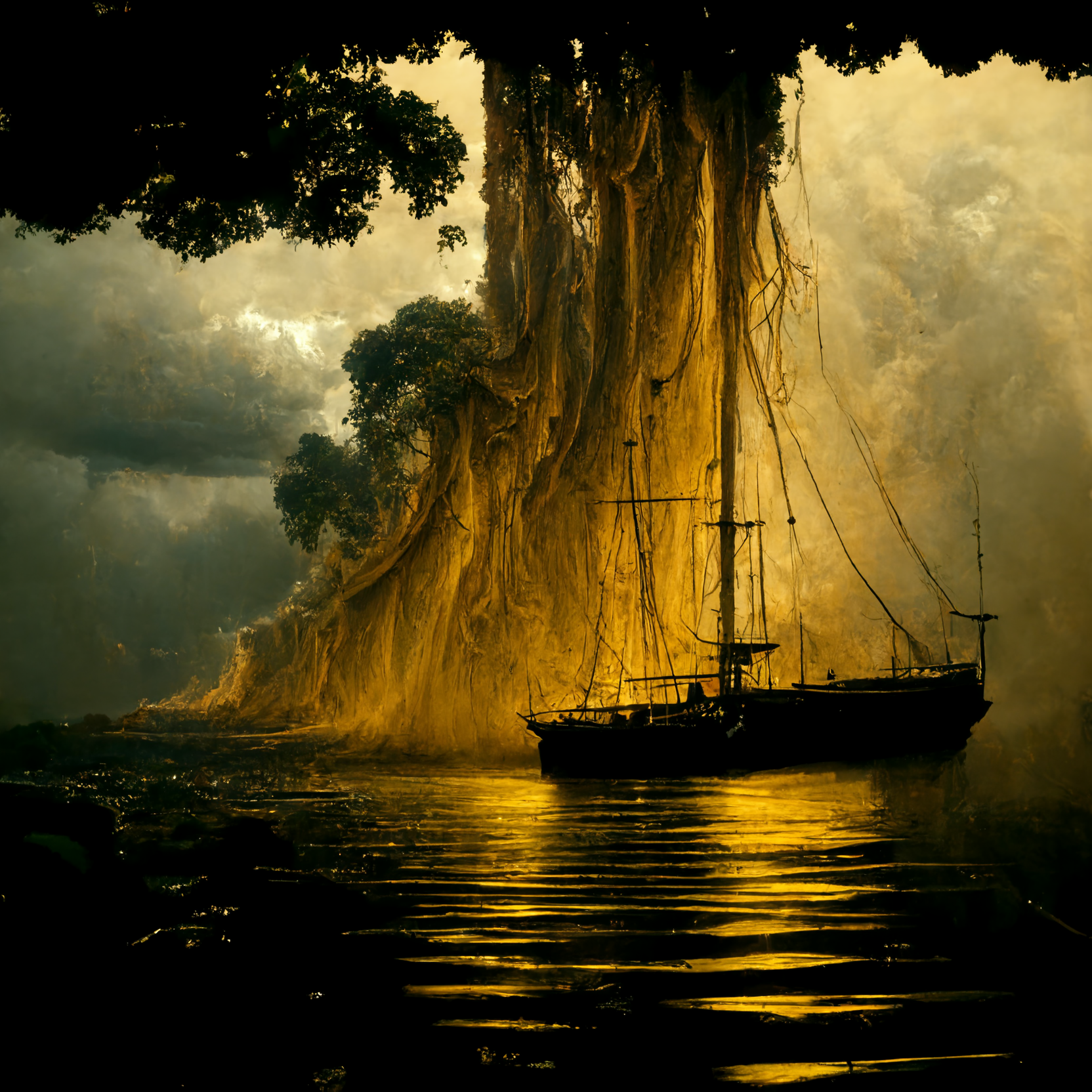 Here only comes at whiles a wind to blow
Returning darkly down the way ye go,
With perfume laden of unearthly trees.

Here only long afar through window-pane
I glimpse the flicker of the golden rain
That falls for ever on the outer seas.